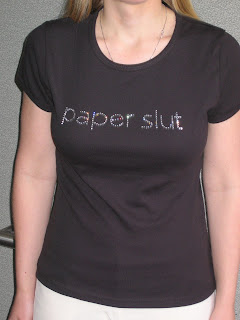 From December 1-7, I am selling my t-shirts for $15 each. That's $10 less than their usual price of $25!
These shirts would make a great gift for the lady who likes to scrapbook, stamp or make cards and other paper crafts!
If you're interested, please e-mail me at i.am.creatively.crazy@gmail.com. 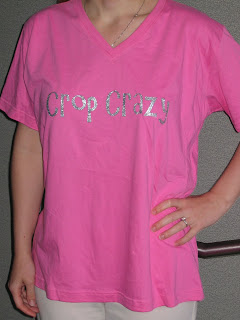 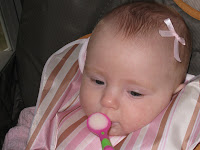 Yum. Yum. Greta tried rice cereal for the first time a few days ago. Our little girl is growing up! Check out how tiny she is in her big ol' high chair! 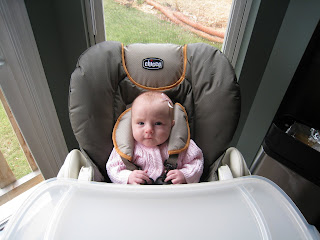 Greta visited her pediatrician last week for her four-month check-up and vaccinations, and she now weighs 11 pounds, 13 ounces.

Not as big as a turkey, but getting there! 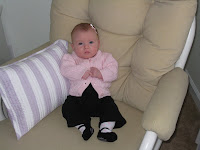 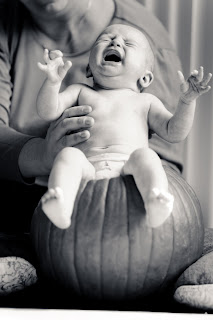 Eric and I were laying in bed last night, reminiscing about where we were in our lives just a year ago. Wow, what a difference a year makes!

Last year at this time was when it all started... Sorry for the TMI, but Thanksgiving weekend is the weekend when little girl's story began. So, we're in bed, and I say to Eric, "A year ago my little egg was starting its travels..." It was dark, so I couldn't see his face, but I'm sure Eric was rolling his eyes. 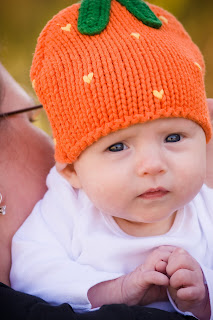 If you stop and think, though, it does make you awe at the miracle of it all. A year ago? Just we. Now? Our we is three.
Parenthood brings a new meaning to gratitude, and it makes this the best Thanksgiving ever. Thank you, Greta.

One Reason I'm Glad I Breastfeed...

Before anyone gets their panties in a bunch... :-) I AM NOT SAYING THAT YOU ARE A BAD MOM IF YOU FORMULA FEED YOUR BABY.

... This morning... It's 5 a.m., and Greta wakes up to eat. Generally, during any middle-of-the-night or early-morning feeding, I keep quiet so that Greta will just eat, not be stimulated, stay halfway sleeping and then easily doze off back into slumber land. This morning, though, she was so stinkin' happy and kept smiling at me. When I went to go pick her up out of her crib -- big gummy smile. When I was changing her diaper, big ol' grin. Now, again, I try to limit interaction so that she doesn't get too awake, but how can you NOT offer back a big smile when she's just throwing 'em at you!?!

Last night, Greta received her first of five injections of the Synagis medication. For those of you who aren't familiar -- Synagis is a shot that helps protects a baby's lungs; specifically, it is to protect a baby from respiratory syncytial virus (RSV). RSV is the number one cause for hospitalization for babies under a year. SCARY. According to the Synagis web site, Preemies and babies born with a heart or lung condition are at higher risk for severe RSV disease, which could lead to serious lung infections like pneumonia and bronchiolitis. It is estimated that the annual infant death rate due to RSV is 10 times greater than that of the flu, with up to 400 infant deaths from RSV each year in the U.S.

We've gotten some flack from friends because we don't take Greta to football Sundays, BBQs or other casual soirees. We don't parade her around town. She doesn't shop at the grocery store or Target, and the mall is also off limits. I run errands when she is with her grandma or Daddy so that I don't have to tote her around and expose her to needless germs.

We limited visitors when we first got home but have since opened our doors to those who aren't sick or haven't been around sick people/children. We don't take her to parties or get-togethers with friends. We wash our hands. A LOT.

Back in the day, when Eric and I had conflicting viewpoints on things, we decided that the determining factor would be the advice of our pediatrician. We figured the neonatologists and pediatrician had more experience than we, and, after all, we didn't spend all that time and energy choosing a pediatrician just to throw his advice out the window. And here's the dealio, folks. Greta was born 7 weeks early at 4 pounds, 12 ounces. When you bake your holiday cookies in a couple weeks, check out that bag of unopened sugar. Greta was smaller than that. (Side note -- she is now 11 pounds, 2 ounces!)

Preemies have compromised immune systems, and therefore have a higher likelihood of getting sick. Yes, she needs to build up immunity to germs, but right now during RSV-season (October - April), it's not worth chancing it. Greta, fortunately, has not gotten sick since being home from the hospital. If there is anything we can do to keep it that way, we're going to.

The Synagis injection is one of the pre-cautions we've chosen to ward off nasty RSV. Our insurance company first denied us coverage, but many a phone call later, and thanks to our incredible pediatrician who appealed the denial, we were finally approved for the injection. Thank God. Otherwise, the injection costs about $1k per month.

You do the math. Five months of the shot. A thousand bucks a pop. That's $5,000. So... A little hand washing, keeping the little chica out of public places, limiting her exposure to unnecessary germs? SO WORTH IT. 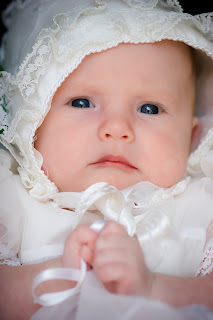 Today you are four-months old. Happy third-of-a-year to you! This past month was a very busy one for you and our little family.

On October 26, you were baptized at the same church that your daddy was baptized. You wore the same dress that your Aunt Karen wore as a little baby, and you were beautiful. You were quite the little lady, too -- no crying except when the water was poured over your head, but that did not last long.


One of the presents that you received in honor of your baptism was a scale. And we've been using the thing like crazy because you are G.R.O.W.I.N.G. For so long, you were so little and fragile, but we're now proud to report that you're catching up with mama, as you now have chubby cheeks, a double chin and rolls on your thighs. Weighing in at about 11 pounds, you're starting to almost outgrow your 0-3 month wardrobe. Just last week, your newborn-sized clothes retired to storage, and I couldn't help but get a little teary-eyed thinking that you'd never wear these little clothes again and in no time, you'd be dressing up your baby dolls in them.


We can no longer swaddle you in plain ol' receiving blankets because you're too long, and plus, you bust out of them because you MUST have your arms out and about. You love looking at yourself in the mirror when we're changing your diaper. You like watching the ceiling fan but not as much as you love looking at me or your daddy when we talk to you. You have grown more generous in coughing up the smiles, and it's so fun to see you do it! 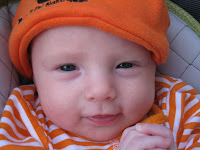 Sometimes you'll wake up from a cat nap, and you'll just look at me and smile, like, "Thanks, mama, I'm glad you're still here." A lot of times, you'll smile and do a little shrug, as if to say, "This smile? This old thing? I've been doing it for a LONG time." You're so proud of your little smiles, and it's precious. 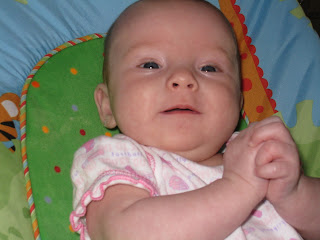 Just in the past 4-5 days you've started talking. A goo. A coo. That's what you like to say. It's the sweetest sound I've ever heard, and I could listen to you all day.

While three-months old, you celebrated your first Halloween, where we dressed you as a pea in the pod. You were pretty darn cute and impressively tolerant of the silly Jolly Green Giant contraption of a hat. I thank you for your patience, because you're slowly learning that sometimes, for your scrapbooking-obsessed Mama, it's ALL about the photo opportunity. 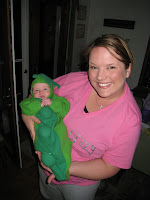 Your daddy and I celebrated our third wedding anniversary just a few days ago. Unlike years past, there were no trips to Mexico or Florida this year. Simple cards replaced presents, and you know what? It was the best anniversary ever because our present was YOU.


So, in Greta's world, you've been making quite a way for yourself, with all the talking and growing and looking sweet and cute all the time! The bigger picture of life has also been making its own way. On November 4, we had the most important presidential election in history. The Republican ticket featured a woman vice-presidential candidate while the Democratic ticket included an African-American presidential candidate, Barack Obama. The Democrats won the election, and Barack Obama was elected the next President of the United States. 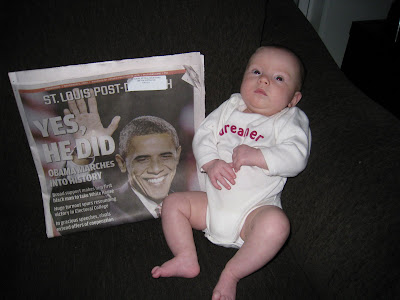 I've never been one to show much interest in politics, but I must admit that I could not help but become captivated by watching this election unfold. It's no longer just my future I'm wishing for, but it's yours. I went to vote, for you.

** A little disclaimer...
The first photograph (the really good one, the one that screams that it was not taken by me) was taken by Michelle Ross of Under Grace Photography.

While looking through my domino magazine, I found this quote in a Motrin ad:

"Sometimes I secretly wish I could trade places with my baby. Instead of lugging around my 30 lb.-stroller, it'd be cool, for just an hour, if someone pushed me around while I chill inside, all bundled up having a poop. That would be awesome."