I grew up in a house with a father who proudly supported the world's largest waterfowl conservation organization. We recycled aluminum cans and newspapers long before it was the "in" thing to do. My mother loved scoring second-hand deals at yard sales and her all-time favorite, Goodwill. Naturally, one would think that the apple did not fall far from the tree and that these thrifty, conservative ways would have passed along to me.

Embarrassingly, I must admit, not so. I've always been a waster. Not a litterbug, but just one who has no regard for the repercussions of having too much and throwing away too much. I've always loved to shop, and I'd often do so without any thought about what I already had at home. Then, when I'd accumulate too much, I'd just get rid. My dad would tell me that money did not grow on trees. It's not that I disagreed; I just did not care.

I wore clothes a couple times and then, when I got sick of them, I just donated them or threw them in a pile to be sold at a yard sale. I'd throw away plastic milk cartons and water bottles without even thinking of recycling them. At work, I would sometimes absentmindedly -- and often purposefully as well -- unnecessarily print duplicates of documents. I'd chuck the unneeded in the trash can without giving thought to the recycle bin.

Now that I've painted a picture of myself as this Mother Earth-hating bitch... It's not that I had it out for her. I was just being selfish. And if there's one thing that having a baby did to me, it's realizing that it's no longer just about me, me, me -- and one day, Greta will be the one picking up the pieces of my irresponsibility.

I reduce by using less. Buying less, shopping less, spending less. I'm slowly minimizing. And, I suppose you could consider my every-other-day showering habits a form of reducing as well?

I reuse by borrowing books from the library, friends or swapping them online. For parties and other gatherings, I use our everyday white Crate and Barrel dishes instead of purchasing paper plates that are used once. I only run the washer when there is a full load. I take my own reusable grocery sacks to the supermarket.

I've developed a burning passion for resale shops and sales, like Once Upon a Child and Kangaroo Kids. Much to my chagrin, just like my bargain-hunter mother, I love getting a great deal! And, as the Kangaroo Kids Web site points out, producing less cotton for new clothing means less pesticides and fertilizers. Buying used clothing also means less energy is needed to produce and ship new clothing from overseas (since hardly anything is made in the United States these days, unfortunately). Buying resale cuts down waste, energy and pollution! And Greta can wear a once-worn Ralph Lauren dress for $6.50! 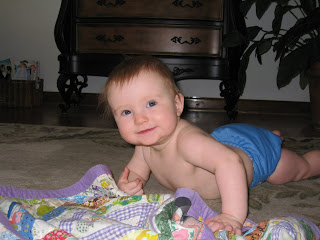 Two months ago, we started cloth diapering. You don't have to look far on the Internet to read about the environmental impact of cloth diapers v. disposable diapers, but here's a place to start.

For the past year, we've recycled our aluminum and newspaper and magazines. A month ago, we began to recycle plastics, paper, tin, glass and all other recyclable discards. The mass amount we collected in just one week was shameful. 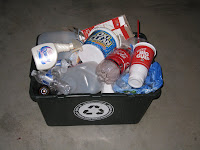 I recently read that it's the small changes that add up to make a big difference. Here's to hoping that my little changes are doing some thing. I'm not saying that I'm an official patchouli-wearing tree-hugger, but I'm proud to say that there is no longer a need for my sister to dig through my trash to weed out the Tide detergent bottle and take it home to Florida to recycle. 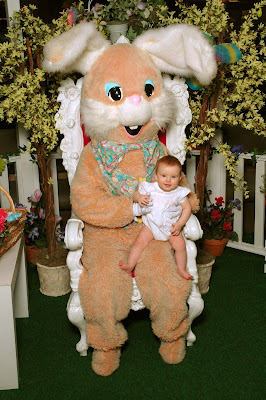 Since we were on RSV lock-down in December, Greta didn't get to meet Santa. So, when we were out and about at the mall, and I saw that the Easter bunny was there, I decided to have Greta's photo taken with him. I wasn't sure how she would do -- if she'd be completely freaked out and cry or what. She seemed to enjoy running her little fingers through the bunny's dirty furry costume. I did my best to not fixate on how many other germy kids had done the very same thing.
As soon as Greta saw the camera, she grinned. (Perhaps I break out my camera a bit frequently and now have her conditioned!?) This photo here was the very first one. She's an easy shot.

How Music Class Saved Me

I drank a fifth of vodka just a bit ago.

That is what I told the cop who stopped me on the way to Greta's music class.

So, I'm driving to Greta's music class, and I get stopped for speeding. For the record, I was trying to get around one of those trucks that say "Keep back 300 feet," and was kicking it in high gear because I realized my exit was quickly approaching. Not the best of excuses, but it's not like I was just driving 80 mph willy nilly. As soon as I high-tail it into the far left fast lane, the cop car is quickly inches from my back bumper, sirens flashing and blaring, urging me to pull over. I make my way over to the far right shoulder, and the cop is at my window in no time.

He looks very, very serious, and I'm shitting in my pants. I do not want a ticket. And I hate getting caught doing something wrong. Who doesn't? I roll down my window, and I just immediately start digging in my bag for my wallet. Greta's cloth diapers and wet bag are flying out. My uneaten morning's breakfast of a bruised banana and Babybel cheese litter my car's passenger seat. I just assume he's going to give me a ticket, so I'm frantically rummaging for my driver's license, basically just ignoring him, trying to avoid looking at him, because I'm feeling ashamed. Embarassed. Nervous. Anxious.

The officer says to me, "Do you know how fast you were going?"

Officer: "I clocked you at 78. Where are you going so quickly?"

Me: "My daughter's music class."

So there is baby Greta in her car seat in the back seat. She's 9 months-old. And yes, she is taking music class.

The cop bursts out laughing. Within just a couple seconds, he turns from stern law enforcement officer to a young 30-something dude you'd have a few beers with in your backyard while bbqing.

I turn up the radio for him and play the class's musical CD, which we had been listening to and singing along to. (Me singing. Greta listening. Poor kid.) The dude on the CD sings, "Boop dee boop dee doo." Or something like that.

The cop, who had just seconds before requested my license and proof of insurance, is still laughing. He leaves me with my insurance card and proceeds to his vehicle with only my driver's license, after reassuring me, "We'll get you out of here quickly."

Meanwhile, I still think I'm getting a ticket and am screaming lots of "Oh damns" in my head.

Cop comes back and says, "Thanks to you, I'm going to have that silly tune in my head all day long. How can you stand that?" And that's when I told him about the vodka.

Looking for the Shirts?