Late last night Teddy started to show signs that he didn't feel well. He refused to nurse, and he wimpered while he slept. When awake, he arched his back, furrowed his brow and grimaced in pain. In the early morning, after 3-4 missed feedings and inconsolable fussiness, I decided to call the pediatrician to get an appointment first thing. Our doctor sent us to the emergency room for tests and monitoring. Blood work and x-rays were ran, and Teddy had a lumbar puncture. The initial results of the lumbar puncture were inconclusive, and we're currently waiting for the results, which should come back in 48 hours. 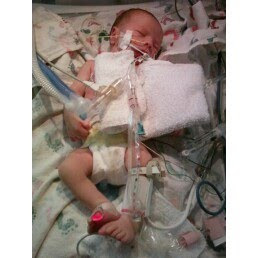 While in the ER, Teddy also began to have issues breathing. This complication, in addition to his other symptoms, caused concern, and the next thing we knew, Teddy was being admitted to the Pediatric Intensive Care Unit @ St. John's, where he's being closely monitored.
Right now, doctors think it's some sort of viral infection. Until a more definite diagnosis can be made, Teddy is receiving multiple antibiotics to fight off whatever he has. Teddy is also currently receiving breathing support from a ventilator and feeds through a feeding tube. The goal is for these machines to do all the work so that Teddy's little body can just do what it needs to do to get better.

Since being intubated, Teddy's been resting more comfortably. No more of the crying out in pain for now.

Thank you to everyone for all your thoughts and prayers.

Dre - I am back on Monday....will plan on looking for you guys. If you need anything in the interim please let me know!

Poor little Teddy...and I know this is so hard on you guys, too. I hope it's just an infection and that he is feeling better soon. If you need anything at all, please let me know!

Andrea, all I can say is my heart goes out to you. Bless his little heart.

dre.....my thoughts and prayers are with you and your family.....little teddy is such a handsome man.....

hope to see all of you soon,
love, kathy

I am praying for you, Teddy, and your family. Take care.

I hope your handsome little guy is feeling better! If you need anything please do not hesitate to ask! Love you all!

Just wanted to let you know that I've been thinking and praying for your family and will continue to do so.

Oh my gosh, honey. I just got back from visiting family in Chicago and was following up on my google reader when I saw this.

I am praying fast and furiously for you and your little family....

You are truly in my heart right now.

We got that little angel on 4 different prayer chains. LOVE YOU!

Andrea --
Just found out a couple days ago that you had your precious little Teddy -- is he ever a doll!! All of you are in my prayers -- and for his speedy recovery.